“The thing about Bangladesh These were our people.

I remember getting very drunk. Because the Faces used to know how to have a good time…In West London, we grew up in a mixed-race place….

…We were honoured to be able to help and I feel the same way now.

I suppose it’s because if you mention something like that you feel like you’re bragging. I know that we did lots of amazing charitable breakthroughs

Pete Townshend of The Who, speaking to the Foreign Press Association, at The Sloane Club, London 7th November 2019

As a small child in 1972, I was deeply impressed during a stay in London by two posters, one for the British Museum’s blockbuster Tutankhamun exhibition and the other for the film of The Concert for Bangladesh.

The film poster fascinated because the bestselling album of George Harrison’s famous concerts the year before at Madison Square Gardens was already ubiquitous enough for me to be familiar with its sleeves, if not its sounds. Yet.

Fast forward to November 2019. The only question I want to ask Pete Townshend at an unrelated book talk, is Do you have any memories of the ‘Goodbye Summer Concert for Bangladesh’ at the Oval cricket ground on 18th September 1971?

Though far less well remembered than the ground-breaking event with George Harrison, Ravi Shankar, Bob Dylan, Ringo Starr et al six weeks earlier in Manhattan, the day long festival at the Oval cricket ground in South London had its own rock superstars. Headlined by The Who and The Faces in their Rod Stewart and Ronnie Wood heyday, it drew about as many people in one sitting as the two shows, (matinee and evening) of the historic Concert for Bangladesh in New York on Sunday 1 August 1971.

As the first of its kind, the Madison Square Garden superstar fundraiser had the organisational support of Apple, the Beatles record company and drew massive global attention. Nearly a quarter million dollars was immediately sent to UNICEF and whilst delayed by tax disputes, many millions more were generated over the years as the Concert for Bangladesh was immortalised on best-selling records and cinema releases.

While no such official footage exists of the Oval concert, plenty of details can be found via Surrey Cricket Club and various cricketing and fanzine websites:

Historically what is most significant about these concerts is not the money they raised to alleviate suffering but the fact that they drew attention to and used the name Bangladesh.

Even at the end of summer 1971, it was not yet certain Bangladesh would escape the fate of Biafra barely a year or so before.  The independence from Pakistan that Bangladesh’s people and the nation’s democratically elected leader Sheikh Mujib had campaigned for peacefully had been brutally suppressed by Yahya Khan’s military junta since March of that year. A genocidal campaign of suppression by the Pakistan army in East Bengal/Pakistan swiftly sent ten million refugees across the border into India.

While there was much public sympathy around the world many doubted the Bangladesh Liberation War could be won before the year was out, as in fact did happen with the help of India’s intervention on 16 December 1971.

Far from being a seemingly non-political cause like Bob Geldof’s famine relief efforts in the 1980s, the hosting of the Concert for Bangladesh in New York, at a moment when the Nixon administration was actively supporting the Pakistan military to prevent Bangladeshi independence, was a politically significant act as well as a humanitarian gesture.

In his authoritative work on The Blood Telegram Professor Gary Bass of Princeton University compellingly relates how President Richard Nixon and National Security Adviser Henry Kissinger, willfully ignored ample evidence provided by their own consular officers led by the late Archer Blood, of atrocities committed by the Pakistan army during 1971.

One reason the pair knowingly indulged Yahya Khan’s brutalities was because his regime was providing a clandestine back channel for Kissinger’s talks with Zhou En Lai, to pave the way for Nixon’s famous trip to, and subsequent recognition of, Chairman Mao’s China in 1972.

Lest anyone doubt the political significance of the Concert for Bangladesh, Bass notes Nixon can be heard bemusedly complaining to Henry Kissinger in recordings available in the State Department’s Foreign Relations of the United States series:  “I see now the Beatles are up raising money for it.” while elsewhere reasoning ‘Biafra stirred people up more than Pakistan because Pakistan, well they’re just a bunch of brown goddamn Moslems.’.”

George Harrison when asked at a press conference about contemporary causes such as opposition to wars against the peoples of Biafra and Vietnam, (the two main reasons cited by John Lennon in his jokily phrased protest letter to the Queen on returning his MBE medal on 25 November 1969, ) implied concerts like Bangladesh should happen more often, but that he had specifically got involved this time at Ravi Shankar’s request,  because “a friend asked me.”

Narrating his memoir, I ME MINE to Derek Taylor, Harrison highlights his clear view of the geopolitics: 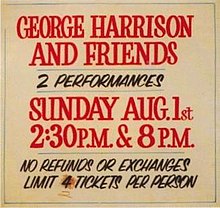 Inevitably many obituaries of Henry Kissinger will cite “opening up China” as his and Nixon’s great achievement. Their complicity with various crimes against humanity will be traded off for “hundreds of millions lifted out of poverty.”

Given the Concert for Bangladesh inspired 1979’s Concerts for Kampuchea for victims of Pol Pot’s genocide in Cambodia, not to mention Band Aid, Live Aid and their successors since the 1980s, George Harrison’s positive legacy is also hard to overstate. With Ravi Shankar and Ali Akbar Khan, the Concert for Bangladesh also had the virtue of showcasing artists from the region as its opening act.

On artistic merit alone, as encapsulated in the film and LP, the Concert for Bangladesh perhaps holds up better than Woodstock in showcasing the best of its era in terms of music, optimism and goodwill.

David Hepworth’s evocative 1971 – Never a Dull Moment: Rock’s Golden Year writes of the Oval concert, among much else, that  “In his autobiography, Rod Stewart remembers driving home after the show to Winchmore Hill with his posh girlfriend at his side, realising that he was now truly the rock star.”

Goodbye to Summer- A rock concert in aid of famine relief of Bangla Desh on Sunday 18 September ‘71 was not the only Bangladesh related rock event that summer in the UK.

Stewart and The Faces had outshone Marc Bolan’s T-Rex in the latter’s most successful year for UK number one singles, just three weeks before at the August Bank Holiday Weeley Festival.

Beatles and the Concerts for Bangladesh 1971 and Kampuchea 1979

Ringo Starr who played on both John and George’s solo albums in 1971 was perhaps a given. But John Lennon and Paul McCartney were also asked by George Harrison to play the Madison Square Garden concerts.

While McCartney in the depths of his legal dispute with his fellow Beatles, to free them all from Allen Klein, was always likely to decline, accounts vary as to why Lennon (on whose Imagine album recording sessions Harrison played earlier that year) did not show.

Most commonly cited are that he would not play without Yoko, or that he wanted to rest in the Virgin Islands. The latter is not entirely implausible as it was a busy year with lots of recording, activism and transatlantic travel. (When Lennon flew to New York from London at the end of August that year, it was the last time he was in the UK.)

In the context of the Bangladesh war ending on 16 December, it is  poignant that Merry Xmas, War is Over (if you want it) was released for the first time in the US on 6 December 1971, making it perhaps the only year when a major war really was over by Christmas.

Some years later, candid as ever, Lennon during his 1980 Playboy interviews was highly sceptical of charity concerts, but even during his rant, also indicated that he supported the Christian practice of tithing.

Unavoidably in 1971 there was huge media and fan speculation, that the Concert for Bangladesh might spark a Beatles reunion.

Despite the facts proving it was never needed, a similar wave arose in late 1979 when Paul McCartney headlined a Bangladesh style series of rock music benefit concerts in London (which have been largely forgotten because of 1985’s Live Aid) for UN sponsored relief in Cambodia following Vietnam’s overthrow of Pol Pot’s genocidal Year Zero regime the previous year.

Featuring contemporary New Wave acts like Ian Dury and the Blockheads and Elvis Costello, the four gigs were noted for featuring key UK rock royalty missing from Madison Square Gardens in 71 (Plant/McCartney/The Who) and the subsequent LP’s thorough sleeve notes excitedly celebrates the concerts for featuring “ Three Led Zeppelins, two Who’s, two Rockpiles, Gary Brooker, Ronnie Laine, an Attraction, a Pretender and a host of others …”

It says something of the status of The Who at the time, that out of many hours of potential contributions from all these artists that , the first four out of only 20 tracks (including collaborations) on the Concerts for Kampuchea double album, were all Townshend compositions  performed by The Who.

Click here for Recording of Pete Townshend’s recollections today of “Goodbye to Summer- A rock concert in aid of famine relief of Bangla Desh , the Oval cricket ground September 18th, 1971”

Recorded at a briefing on his novel ‘Age of Anxiety’ to the Foreign Press Association, at The Sloane Club, London 7th November 2019.

(with thanks to Deborah Bonetti, Foreign Press Association (FPA) Director for reading out my question and prompts.  (* I am the “he” being referred to in That’s what he wants to know at the start and also the end.)

Do you have any memories of the ‘Goodbye Summer Concert for Bangladesh’ at the Oval cricket ground on 18th September 1971?

Fun with the Faces

Pushed out of a car while driving?

No, no. We stopped the car and then pushed her out. She staggered back and (then) went through a shoe shop window.

Roger’s actually strange, why would he not mention that?

I don’t suppose I mentioned it either. I suppose it’s because in a sense if you mention something like that you feel like you’re bragging. I know that we did lots of amazing charitable breakthroughs.

Double O my charity was started by The Who (in 1976) to help Erin Pizzey start the Women’s refuge system. She ran the first women’s refuge in the world in Chiswick in the UK, and subsequently other charities.

Double O went on to be a charity that became well known for helping people with drug problems, putting them through rehab and so on. And more recently, the teen cancer (Teenage Cancer Trust) stuff that we do, so we’ve always done that stuff.

The thing about Bangladesh was (pause)

These were our people.

People that don’t know about London, people that think, oh well its’s just a big conurbation full of all different kinds of people

In West London, we grew up in a really mixed, race place. Polish, Japanese, lots of Jewish people, mainly from Poland, but also from Russia.

People from Somalia, I think we brought in ten thousand Somalians after the War (WWII)  So, these were kids of our age from the Caribbean (and Bangladesh) The Bangladeshis tended to work very hard, so we respected them. We adored them and you know we wanted to help. It was a terrible tragedy .  (Flood wasn’t it, I think it was)

We were honoured to be able to help and…

I feel the same way now.

Pete Townshend recorded at a briefing on his novel ‘Age of Anxiety’ to the Foreign Press Association, at The Sloane Club, London 7th November 2019.

(as reviewed in Democracies at war over genocide

Rolling Stone review of ‘Who I Am’ https://www.rollingstone.com/music/music-news/book-review-pete-townshends-who-i-am-could-be-the-most-conflicted-rock-memoir-of-all-time-172579/

Thanks a Lot, Mr. Kibblewhite: My Story